Our Personal Experience with Epilepsy

I have three children: Boy/girl twins and another boy about 19 months younger than the twins. Neither me nor my wife have any family history of seizures. Until I was well within my 30’s I had never even seen an epileptic seizure in person. I had lifeguarded years earlier; I’ve done my share of CPR on adults and children who have drowned. But it wasn’t until a client suddenly cried out and collapsed on the ground in his office that I witnessed a tonic clonic (grand mal) seizure. I had no idea what to do.

That moment alarmed me because while I had plenty of experience dealing with people who have drowned and found that resuscitation training stuck with me way after my brief lifeguarding experience ended (20 years after my initial training I found myself having to do CPR on a 4 year old who drowned in a community pool—he survived), I had no experience with epilepsy or seizures.

Our daughter’s seizures were the first to come and go. At about 8 years old she began suffering from absence seizures. It took us a while to figure out what was happening. She would pause mid-sentence or stare blankly for a moment and then go right back to what she was doing as if no time passed. She would also have very short seizures, similar to when one feels a chill. They were brief but by the time we realized something was wrong she would have either absence seizures or those short chilling shakes almost constantly—almost every minute throughout the day and they were beginning to last longer and longer. An EEG didn’t reveal much to the doctors. We decided to take her off all screens—no laptops, computers, iPads, or anything that would have a strobe effect. We started making her sleep 12 to 14 hours. Within a week the absence seizures decreased in frequency to one every 15 minutes. By two weeks later she was down to one or two per day. By the third week, she was seizure free. After 6 weeks of 12 hours of sleep per night and no screens we slowly relaxed those rules and, thankfully, the seizures did not return. We thought we were out of the woods. 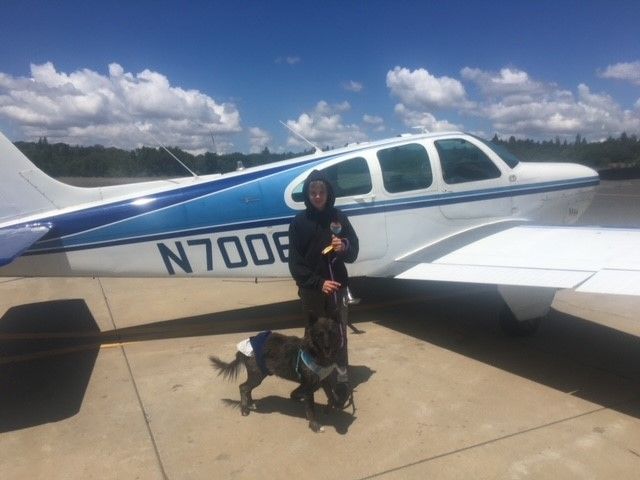 My son, Auden, with a rescue pup we were transporting in our plane for Pilots n' Paws.

Several years later my sons were playing in a hockey tournament in Lake Tahoe, California. My oldest son, the twin, was playing as a center and my younger son playing goalie. My older son was playing his first game of the tournament and didn’t quite look right. He looked a little slow, he was missing a piece of his uniform (which wasn’t too unusual for him actually), and overall didn’t appear to be his normal self. Toward the end of a game they were losing badly, my son got the puck and had a breakaway. The goalie came out and clipped my son, who spun wildly in the air before hitting the metal goal posts with his chest. I was worried he may have cracked some ribs. He got up, skated back to the bench, and sat for the last minute of the game.

About 30 minutes later he came out of the locker room, shirt on inside out and backwards. This animated 11-year-old who normally cannot stop talking for more than a few seconds was eerily quiet and expressionless. He looked profoundly sad, as if someone told him a puppy died. But when I asked if he was upset his response was a simple “no.” I decided he had suffered a concussion, that he was done playing the tournament, and that I’d later have one of the team moms, a pediatrician, take a look at him to confirm the concussion. “Ok, I thought, we’ll get something to eat, watch his little brother play, and then I’ll break it to him that he’ll have to take about 3 or 4 weeks off.”

So, there we were, eating some bad food at the café in the rink and waiting for little brother to take the ice with his team when my older son suddenly turned to me with a fearful “something is really wrong” expression and then the same cry out I heard from my client years earlier. As soon as I heard that cry I knew what was happening. I grabbed my son as he stiffened, pulled him out of the chair he was in and put him on his side. I made sure his mouth was clear of any food and that he had an open airway. I was immediately back in lifeguard/first responder mode. He has a pulse, he has an open airway, he’s breathing, his color is pale but not purple, he’s got a folded jacked under his head to cushion him against the convulsions . . . . Someone called 911 and a few parents who were doctors jumped in.

I can’t tell you how long the seizure lasted—a minute, an hour, a day. I was back in the calm but cold mode of “I just need to keep this person alive until the ambulance arrives.” At one point one of the doctors asked me if I know this child or know where his parents are. “He’s my son,” I said.

It wasn’t until we made it to the hospital in Tahoe that I could allow myself to relax. He made it to the emergency room, he’s lucid and talking to the doctors—non-stop talking with bad jokes—his normal self. The doctors were kind enough to let me watch the CT scan and I could see right away it was clear—no bleeding in the brain. Good, because no scarring; bad, because this may mean he has a propensity for seizures. Maybe. No one could really tell what happened—was it caused by the concussion? Was it a result of high altitude? Was it because he’s been up all night playing with his teammates? Is it all of these things combined? We didn’t get any answers. We let him back on the ice 6 weeks later. He joined his team two weeks after that. We moved along and hoped it was over.

Countless hockey games and 18 months pass without issue. In addition to hockey, all three kids have taken up boxing, surfing, and skateboarding. We’re nearly six months into the Covid pandemic at this point with all three on screens for Zoom classes. Our youngest son is on his class downstairs when he hears a loud thump coming from his room, followed by some knocking sounds. He goes upstairs to see what is happening (thinking the dogs are eating his toys) and finds his older brother on the floor facedown violently convulsing—his the back of his head smashing against his bed frame and his face hitting the floor. Our youngest, now 11, pulls his 13 year old brother out from underneath the bed frame and yells for his older sister to help. She runs in and manages to put a pillow under her twin brother’s head. My wife, who was out grocery shopping, returned home to hear the commotion. My cell phone starts blowing up. Our oldest settles out of the seizure. He’s got a fairly good sized goose-egg on the back of his head and some bruising on his face but he’s otherwise ok.

We drive to the emergency room. We’re told “you get one free unprovoked seizure” and that there’s nothing really to do right now. After a few hours we went home with some follow up appointments scheduled but with no real answers. Just as with his twin sister a few years earlier, we had our oldest son go to bed early, try to get 12 hours of sleep, and stay off screens even for school. A week later, however, he suffered another, although less intense, seizure. After an EEG and a second trip to the ER, he was formally diagnosed with epilepsy and given 500 mg of Keppra per day. “Dad, am I epileptic?” . . . “Yes,” I say. Tears well up in his eyes. “Dad, how long will I have to take medication?” I couldn’t sugar coat this one: “Maybe forever . . . . maybe a few years . . . maybe a few months . . . we don’t know.” He’s crying again and can’t hide it this time. He’s crumpled and heartbroken. He asks why it’s him. He says it’s not fair. He sobs that he’ll never be able to drive. It’s heart-wrenching.

Thankfully, the medication effectively managed the seizures. We started making sure he was sleeping 12 hours per night—he grew an inch in just one month. We started easing the Keto Diet into his every-day life and we decided we would do it as a family.

But, like anything, we began to get complacent. He suffered a few tremors after being up late. About three weeks after those tremors, we arrived at his boxing lessons on a Saturday morning and he began to have an aura—a sensation of zooming in and out. He’s had those before without a seizure and he’s determined not to let them interfere with his life, so he went forward with his boxing lessons. About five minutes after he started jumping rope, however, he began to have tremors. I pulled him out of the lesson, let my other kids keep going and we went to my car. I started recording the tremors, first by just marking when he had one and then I started recording the time, after about two dozen I started recording the time and the duration. He was having them every minute for about 10 seconds each. 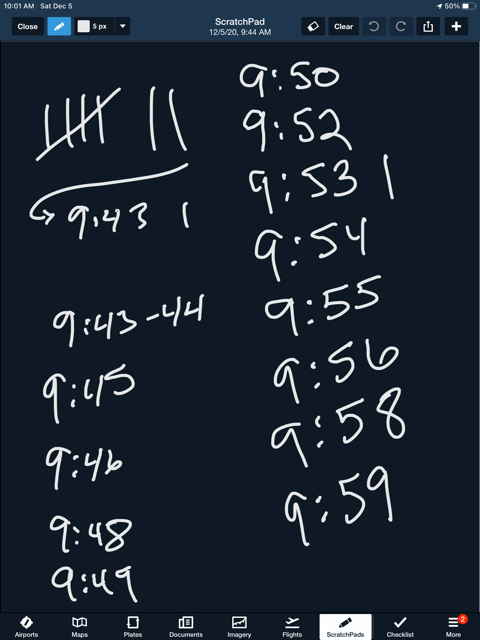 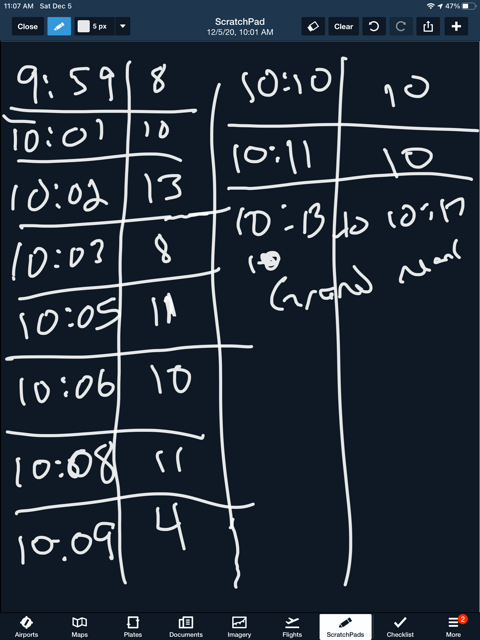 Tracking his tremors before the tonic clonic seizure hit.

After about 33 tremors he finally slipped into a tonic clonic seizure. It lasted about four minutes. I put him on his side in my SUV when it happened, I loosely held him, and when he started to come-to I just had him lay on his side to sleep. By this time, we’re no longer going to the ER. Instead, I let my son sleep in the front seat and I wait for my other son and daughter to finish their boxing class. We go home. I carry my 125-pound 13 year-old son to the couch and let him sleep for another three hours. I threw away any food that is not Keto—I threw away pasta, rice, cereals, bread, tortillas, oatmeal--anything and everything that would tempt him.

How Epilepsy has changed our lives

We are determined not to let this interfere unnecessarily with his life. Nonetheless, it has been a difficult adjustment. The most difficult part has been the family's adjustment to the Keto Diet. We are not letting our son go through this alone. We are all doing the Keto Diet and suffering through it (i.e., all being "hangry" at the same time).

Local to San Diego, California? Check out the Epilepsy Foundation of San Diego County (www.epilepsysandiego.org). This organization is an amazing resource with scores of helpful volunteers and advocates. They offer many services, including visiting your work place to help your employer identify ways it can reasonably accommodate your workplace to reduce the things that may trigger seizures.