As more and more consumers across the United States are diagnosed with Type 2 diabetes, many are turning to sodium-glucose co-transporter 2 (SGLT2) inhibitor diabetes drugs like Farxiga and Invokana, which have been marketed by their drug manufacturing companies as a safe and effective means of treating Type 2 diabetes in adults. However, serious concerns have been raised recently about the potential health risks of SGLT2 inhibitors, as new information suggests the medications may be linked to an increased risk of ketoacidosis, diabetic coma, kidney failure and death. If you took Farxiga in the past, and you have since been diagnosed with a serious side effect like diabetic ketoacidosis (DKA), contact a reputable Farxiga lawyer today to discuss your possible compensation options. 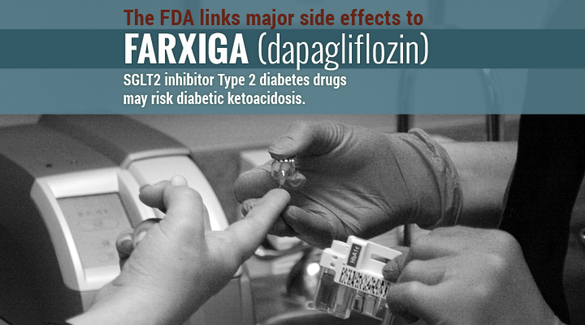 Farxiga and other SGLT2 inhibitor medications have been linked to severe side effects, such as diabetic ketoacidosis and kidney failure.

Farxiga (dapagliflozin) is an oral diabetes medication designed to be used in combination with diet and exercise to help control blood sugar levels in individuals with Type 2 diabetes. Like Invokana and other SGLT2 inhibitors, Farxiga works by blocking the reabsorption of glucose by the kidneys and by helping the kidneys excrete glucose from the bloodstream, thereby lowering blood sugar levels. Farxiga was approved by the U.S. Food and Drug Administration (FDA) in January 2014, and is currently manufactured and marketed by drug makers AstraZeneca and Bristol-Myers Squibb.

Since Farxiga and other SGLT2 inhibitor drugs first entered the market in the United States, the companies responsible for making and selling the medications have claimed that they are a safe and effective treatment for Type 2 diabetes. However, a growing body of research has identified some severe medical complications allegedly linked to SGLT2 inhibitors like Farxiga and Invokana, including:

The alleged side effects of Farxiga are so severe in fact, that an article published by the Huffington Post just one month after Farxiga first entered the market named the SGLT2 inhibitor the “worst new drug of 2014.”This doesn’t come as too much of a surprise though, considering the fact that the FDA rejected Farxiga two years ago, over concerns about the risk of serious side effects, and doubts about how well the medication can actually protect patients from the long-term health risks of diabetes.
Warnings for Farxiga Users

The most serious concern regarding the potential side effects of SGLT2 inhibitors like Farxiga is diabetic ketoacidosis, a major medical condition caused by the presence of excessive levels of acids called ketones in the blood, which can lead to diabetic coma and death. In May 2015, the FDA issued a drug safety communication highlighting at least 20 instances of ketoacidosis identified as diabetic ketoacidosis, ketoacidosis or acidosis in patients treated with SGLT2 inhibitors between March 2013 and June 6, 2014. That same month, the Institute for Safe Medication Practices (ISMP) issued its own safety report, outlining the risk of kidney toxicity from SGLT2 inhibitors, and the FDA has also reported that side effects of Farxiga may cause further damage in patients with moderate to severe kidney damage (which many diabetics have), possibly leading to life-threatening kidney failure.

Research has also shown that Type 2 diabetes patients taking Farxiga may have a five-times increased risk of developing bladder cancer side effects than patients taking older diabetes medications. According to an FDA analysis based on findings by the companies making and selling Farxiga, the SGLT2 inhibitor medication has the potential to stimulate bladder cancer in individuals already at risk for the disease. The concern here is that patients with Type 2 diabetes usually take diabetes medications for years, and the longer a person takes Farxiga, the greater their risk of developing bladder cancer, which could eventually lead to death.

In order to further examine the potential health risks of Farxiga, the FDA is requiring AstraZeneca and Bristol-Myers Squibb to study 17,000 diabetes patients for at least four years, to determine whether and how often Farxiga users are diagnosed with kidney failure, liver problems, cancer or heart disease from long-term use of the SGLT2 inhibitor medication. If you believe you have been adversely affected by side effects of Farxiga, consult an experienced Farxiga attorney today for legal help. You may have grounds to file a Farxiga lawsuit against AstraZeneca and Bristol-Myers Squibb, in order to pursue financial compensation for your injuries, medical expenses, and emotional trauma.