Researchers and federal drug regulators are warning consumers and the medical community that a popular class of prescription drugs used to treat Type 2 diabetes may put users at risk for devastating side effects, including diabetic ketoacidosis (DKA), kidney failure, and death. If you took a Type 2 diabetes medication like Glyxambi, and you have since suffered ketoacidosis or another potentially life-threatening complication, contact a reputable Glyxambi attorney today for legal help. You may have grounds to file a Glyxambi drug injury lawsuit against Boehringer Ingelheim and Eli Lilly and Company, in order to pursue the financial compensation you deserve for your injuries, medical expenses, and pain and suffering. 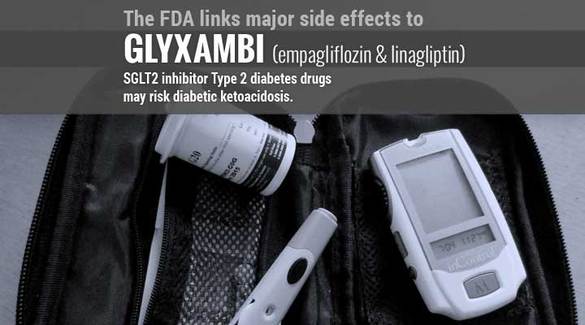 Glyxambi and other SGLT2 inhibitor medications for type 2 diabetes have been linked to a number of serious complications.

Glyxambi is an oral diabetes medication that combines empagliflozin and linagliptin, and is commonly used along with diet and exercise to lower blood sugar levels in adults with Type 2 diabetes. Glyxambi belongs to a newer class of Type 2 diabetes drugs called sodium-glucose co-transporter 2 (SGLT2) inhibitors, which are designed to promote the removal of sugar from the bloodstream by the kidneys, thereby lowering glucose levels and reducing the risk of diabetes complications like blindness, kidney damage, nerve damage and problems with sexual function. Glyxambi was approved by the U.S. Food and Drug Administration (FDA) in February 2015, and is currently manufactured by Boehringer Ingelheim and Eli Lilly and Company.

POSSIBLE SIDE EFFECTS OF GLYXAMBI

When the very first SGLT2 inhibitor drug, Invokana, was approved by the FDA in March 2013, it was touted by Johnson & Johnson and its Janssen Pharmaceuticals subsidiary as a breakthrough treatment for Type 2 diabetes. In the years since, however, new warnings have shown a possible connection between SGLT2 inhibitors like Glyxambi and potentially life-threatening side effects, including the following:

Although SGLT2 inhibitors like Glyxambi are relatively new medications, concerns are already being raised about the potential for the diabetes drugs to cause serious side effects in users. In May 2015, the FDA issued a drug safety communication warning consumers and the medical community about the risk of a serious medical condition linked to SGLT2 inhibitors called diabetic ketoacidosis, which is characterized by elevated levels of toxic acids called ketones in the bloodstream. According to the FDA warning, there were 20 instances of acidosis identified as diabetic ketoacidosis, ketoacidosis or acidosis in patients treated with SGLT2 inhibitor drugs from March 2013 to June 6, 2014.

The same month as the FDA warning, the Institute for Safe Medication Practices (ISMP) issued an independent report based on adverse events submitted to the FDA involving side effects from the very first SGLT2 inhibitor, Invokana. In the report, the ISMP identified 457 side effect reports involving kidney toxicity and other alleged side effects of Invokana during its first year on the market. Boehringer Ingelheim also warned in its press release announcing Glyxambi’s approval that one of the active ingredients in the Type 2 diabetes medication, linagliptin, may cause additional side effects in users, including dehydration, inflammation of the pancreas, kidney problems, and acute pancreatitis possibly leading to death.

A SKILLED GLYXAMBI LAWYER CAN HELP

The rate of severe medical complications from SGLT2 inhibitors like Glyxambi is alarming, considering the first medication in the new class of diabetes drugs was first introduced just two years ago. And because adverse event reports submitted to the FDA typically represent only a small percentage of the adverse events that actually occur, the rate of diabetic ketoacidosis and other side effects from Glyxambi and other SGLT2 inhibitor drugs is likely be much higher. If you believe you have been harmed by side effects of Glyxambi, consult a knowledgeable product liability lawyer to explore your possible compensation options. With an experienced Glyxambi attorney on your side, you can protect your legal rights and seek fair and timely reimbursement for your losses.