New-generation diabetes drugs like Invokamet, Invokana, Jardiance and Glyxambi have been linked to a significantly increased risk of diabetic ketoacidosis (DKA) and other devastating medical complications, and the FDA has identified more than a dozen cases of diabetic ketoacidosis side effects among users of SGLT2 inhibitors like Invokamet. If you took Invokamet or another SGLT2 inhibitor in the past, and you have since been diagnosed with a major complication like ketoacidosis, kidney failure or heart attack, contact a reputable Invokamet lawyer today for legal help. You may be entitled to financial compensation for your injuries and medical bills, which you can pursue by filing an Invokamet injury claim against Johnson & Johnson and Janssen Pharmaceuticals. 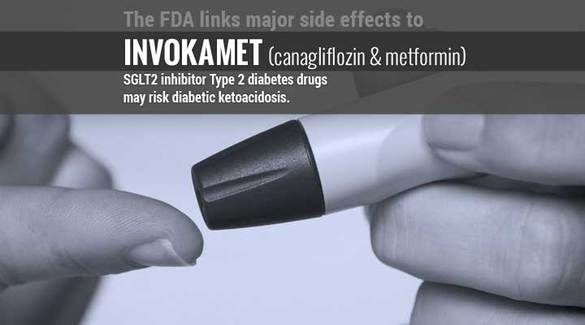 Invokamet, along with other SGLT2 inhibitor medications, has been linked to an increased incidence of side effects and complications

Invokamet is a combination of two medications (canagliflozin and metformin), and is designed to be used with a proper diet and exercise program to control high blood sugar in adults with Type 2 diabetes. Invokamet was approved by the FDA in August 2014, and is currently manufactured by pharmaceutical giant Johnson & Johnson’s Janssen Pharmaceuticals subsidiary. The medication belongs to a class of diabetes drugs called sodium-glucose co-transporter 2 (SGLT2) inhibitors, which function by blocking the reabsorption of glucose by the kidneys and promoting the excretion of glucose through the urine.

Type 2 diabetes is a chronic medical condition that can result in serious complications like blindness, kidney damage and nerve problems, and SGLT2 inhibitors like Invokamet are intended to help restore the body’s proper response to the insulin it naturally produces, thereby lowering the risk of additional problems. However, mounting evidence suggests that Invokamet and other SGLT2 inhibitors like Invokana and Farxiga may actually put users at an increased risk of devastating side effects, including:

Despite the fact that the very first SGLT2 inhibitor was approved for consumer use just two years ago, serious doubts are already being raised about the safety of the medication class, with particular attention being paid to the alleged risk of diabetic ketoacidosis from Invokamet and similar Type 2 diabetes drugs. According to a drug safety communication issued by the FDA in May 2015, there were at least 20 instances of acidosis reported as diabetic ketoacidosis, ketoacidosis or acidosis among patients treated with SGLT2 inhibitors like Invokamet between March 2013 and June 6, 2014. The FDA indicated that, while diabetic ketoacidosis usually occurs in Type 1 diabetes patients with high blood sugar levels, the DKA side effects identified in the adverse event reports were diagnosed in Type 2 diabetes patients with blood sugar levels that were only slightly elevated.

Type 2 diabetes is a chronic condition diagnosed in millions of individuals every year, and new-generation diabetes drugs like Invokamet are being prescribed at a faster rate than ever, based on claims by the drug manufacturing companies that the medications are safe and effective for the treatment of Type 2 diabetes. Unfortunately, a growing body of research has identified Invokamet use as a possible risk factor for diabetic ketoacidosis and other potentially life-threatening side effects in users. If you have been diagnosed with a serious medical condition like DKA or kidney failure, and you believe Invokamet to be the cause, consult a knowledgeable Invokamet attorney to discuss the possibility of filing a drug injury claim against Janssen Pharmaceuticals for damages.