Users of a class of Type 2 diabetes drugs called sodium-glucose co-transporter 2 (SGLT2) inhibitors are being warned by federal regulators and researchers that the medications may put them at risk for serious and potentially life-threatening side effects, like ketoacidosis, diabetic coma and death. If you have taken Jardiance or another SGLT2 inhibitor to treat your Type 2 diabetes, and you have since suffered a major complication like diabetic ketoacidosis (DKA), contact an experienced Jardiance attorney today to discuss the possibility of filing a Jardiance claim against Boehringer Ingelheim. With a qualified drug injury lawyer on your side, you can protect your legal rights and seek fair and timely reimbursement for your losses. 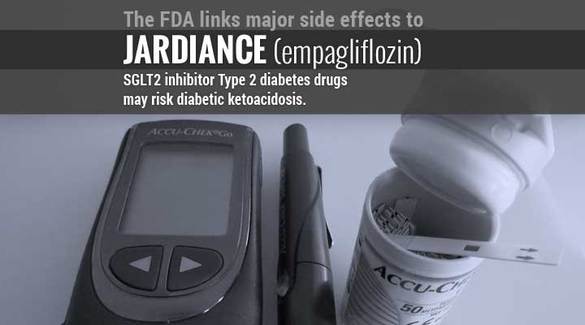 Jardiance and other similar medications have been connected to a number of adverse side effects, including diabetic ketoacidosis, kidney failure, and heart attacks.

Jardiance (empagliflozin) is an oral diabetes medication commonly prescribed with diet and exercise, to help control blood sugar levels in adults diagnosed with Type 2 diabetes. Jardiance is manufactured by pharmaceutical company Boehringer Ingelheim, and the medication functions by blocking the reabsorption of glucose by the kidneys, and helping the kidneys get rid of glucose from the bloodstream. The Type 2 diabetes drug garnered approval from the U.S. Food and Drug Administration (FDA) in August 2014, more than a year after the first SGLT2 inhibitor, Invokana, was introduced in the United States in March 2013.

Although Jardiance and other SGLT2 inhibitor drugs have been promoted by their manufacturing companies as safe and effective treatments for Type 2 diabetes, the medications have been linked in recent research to an increased risk of devastating complications. Among the side effects allegedly associated with SGLT2 inhibitors like Jardiance are:

According to the FDA, Jardiance can cause dehydration in users, resulting in a drop in blood pressure that can lead to dizziness or fainting, and a decline in renal function – a side effect that appears to be more common in the elderly, in patients with impaired kidney function, and in patients taking diuretics to treat other conditions. The main concern regarding side effects of Jardiance and other SGLT2 inhibitor drugs is an increased risk of diabetic ketoacidosis, a condition characterized by elevated levels of toxic acids in the bloodstream called ketones. According to an FDA warning issued in May 2015, there were at least 20 cases of acidosis identified as diabetic ketoacidosis, ketoacidosis or ketosis reported among patients treated with SGLT2 inhibitors like Jardiance between March 2013 and June 6, 2014.

The same month the FDA issued its SGLT2 inhibitor drug safety communication, the Institute for Safe Medication Practices (ISMP) issued its own independent report based on adverse events submitted to the FDA. According to the ISMP report, during its first year on the market, there were 457 adverse events reported to the FDA involving kidney toxicity and other potential side effects of Invokana, the first SGLT2 inhibitor ever to be approved by the FDA. In light of these potential risks, the FDA is requiring four post-marketing studies involving Jardiance treatment, including:

AN EXPERIENCED JARDIANCE ATTORNEY CAN HELP

Statistics show that Type 2 diabetes affects approximately 26 million people in the United States, putting them at risk for life-altering complications like blindness, heart disease, and nerve and kidney damage. Unfortunately, a growing body of research suggests that popular medications used to treat Type 2 diabetes, like Jardiance and other SGLT2 inhibitors, may expose users to side effects that are equally as devastating, including diabetic ketoacidosis, kidney failure, heart attack, stroke and death. If you have suffered one or more of these complications, and you believe Jardiance to be the cause, consult a reputable Jardiance lawyer today for legal help. You may have grounds to file a Jardiance lawsuit against Boehringer Ingelheim, in order to pursue financial compensation for your injuries and medical expenses.