Users of Xigduo XR and other popular Type 2 diabetes medications called SGLT2 inhibitors may be at risk for kidney failure, diabetic ketoacidosis and other potentially life-threatening side effects from the prescription drugs, which have been named in hundreds of adverse event reports submitted to the U.S. Food and Drug Administration (FDA) in recent years. If you took Xigduo XR in the past, and you have since suffered a devastating complication like diabetic ketoacidosis (DKA), heart attack or kidney damage, contact an experienced Xigduo XR attorney today to discuss your options for legal recourse. With a qualified drug injury lawyer on your side, you can protect your legal rights and seek fair and timely reimbursement for your losses. 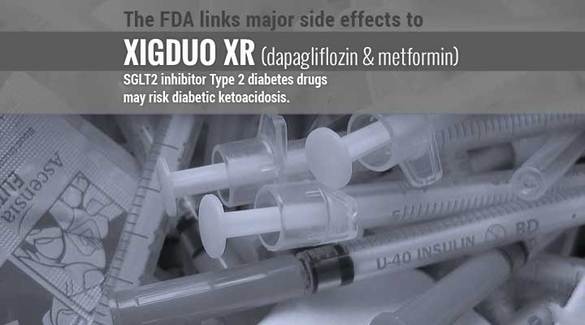 Xigduo XR and other SGLT2 inhibitor medications have been linked to an increased incidence of serious side effects, such as diabetic ketoacidosis, heart attack, stroke, and kidney failure.

Xigduo XR is made up of two oral anti-hyperglycemia medications (dapagliflozin and metformin HCl), and is designed to be used in combination with a diet and exercise program to improve glycemic control in adults with Type 2 diabetes. Xigduo XR belongs to a class of diabetes drugs called sodium-glucose co-transporter 2 (SGLT2) inhibitors, which are designed to lower blood sugar by blocking the reabsorption of glucose by the kidneys and helping the kidneys remove glucose from the bloodstream through the urine. Xigduo XR garnered approval from the FDA in October 2014, and is currently manufactured by pharmaceutical company AstraZeneca.

Since it first entered the market in the United States, Xigduo XR has been aggressively promoted by AstraZeneca as a safe and effective treatment for Type 2 diabetes in adults. However, serious concerns have been raised recently about the potential health risks of Xigduo XR and other SGLT2 inhibitor drugs. Among the side effects allegedly associated with Xigduo XR are:

The side effect most commonly linked to SGLT2 inhibitors like Xigduo XR is diabetic ketoacidosis, a serious medical condition characterized by dangerously high levels of toxic acids in the bloodstream. Ketoacidosis is often associated with symptoms like nausea, vomiting, confusion, breathing problems, abdominal pain, and unusual fatigue or sleepiness, and can lead to life-threatening complications if not treated promptly.

The first indication that Xigduo XR and other SGLT2 inhibitors could put users at risk for severe complications came in May 2015, following a search of the FDA’s Adverse Event Reporting System, which turned up 20 cases of acidosis reported as diabetic ketoacidosis, ketoacidosis or acidosis in patients treated with SGLT2 inhibitors between March 2013 and June 6, 2014. The Institute for Safe Medication Practices (ISMP) issued its own report in May 2015, based on adverse events reported to the FDA in connection with the SGLT2 inhibitor drug Invokana, and the agency identified 457 adverse event reports submitted to the FDA during the drug’s first year on the market.

According to data from a clinical trial involving a prespecified pool of patients from eight short-term, placebo-controlled studies of dapagliflozin administered in combination with metformin, the overall incidence of adverse events among patients treated with dapagliflozin and metformin was 60.3%, compared to 58.2% for the group treated with metformin and a placebo. The most commonly reported adverse events leading to discontinuation of treatment during the clinical trial included kidney damage, increased blood creatinine, reduced renal creatinine clearance and urinary tract infection. In light of these alleged side effect risks, drug injury lawyers across the country are investigating claims filed on behalf of consumers who believe they have been harmed by side effects of SGLT2 inhibitors like Xigduo XR.

Type 2 diabetes is a serious condition that affects millions of people in the United States and can lead to long-term complications like blindness, kidney damage and irreversible nerve damage. However, it is a point of serious concern when some of the top medications prescribed to treat Type 2 diabetes have the potential to expose patients to side effects that are equally as devastating, including ketoacidosis, kidney failure, diabetic coma and death. If you or a loved one has experienced one or more side effects of Xigduo XR or another SGLT2 inhibitor drug, consult a reputable drug injury lawyer to explore your possible compensation options. You may be entitled to financial compensation for your injuries and medical bills, which you can pursue by filing a Xigduo XR claim against AstraZeneca.