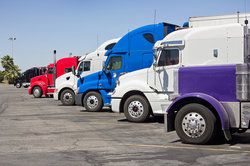 All car accidents carry a very real and significant risk of injury, but this risk is especially great when a truck is involved. The sheer mass and force with which a truck can collide into a smaller vehicle is staggering, causing severe injury or death to anyone involved. If such an event occurs, the party who is at fault for the accident should be held accountable for any damages that ensue. Sadly, not everyone is ready to admit fault in the case of an accident, resulting in a legal battle just to prove what had transpired.

If you or a family member has been hurt in a truck accident, make sure you take the necessary steps to prove fault. With the right knowledge beforehand and an experienced personal injury attorney, you can get the compensation you deserve.

Who Is at Fault?

When dealing with personally owned and operated vehicles, accidents are a bit more clear-cut: they are generally the fault of one driver or another. While this certainly may be the case in a trucking accident, there are additional factors that may also need to be considered. By pursuing your case, we will help identify who or what was exactly at fault, such as:

In order to prove fault in a truck accident, the accident must be conceptually recreated as best as possible. When you work with a knowledgeable attorney, you can rest assured that every avenue will be investigated for telling evidence. This includes speaking with eyewitnesses, gathering police reports, taking photos of the scene, and hearing from auto accident experts. In some cases, we may look at the driver’s history with the company and with driving in general. Ultimately, we need to prove that guilty part was negligent in their duty, resulting in the given accident.

When a truck driver is at fault, it is helpful to examine all the ways in which he or she may be have been negligent while on the road. State traffic laws may provide crucial evidence in the event the driver disobeyed them. After reconstructing the accident, we will compare it with any relevant laws such as speed limits, right of way, and roadway markings. In some cases, traffic laws can also prove that you cannot be at fault. For instance, in most cases, you cannot be held responsible if someone hits you from behind, as it is always their responsibility to drive from a safe stopping distance. Similarly, if the truck was making a left-hand turn at the time of the accident, it is almost guaranteed to have been the truck driver’s fault.

Results of a Successful Case

If you can successfully prove that the other party was at fault for your accident, you can be awarded compensation on multiple fronts. In addition to any damages to your vehicle or property, you can be financially reimbursed for hospital bills, doctor visits, medication, resulting physical therapy, loss of income, and pain and suffering. If a loved one has been killed in such an accident, a wrongful death suit may be filed to award compensation to the family.

Injured In a Truck Accident?

Don’t let another driver’s negligence continue to weigh down upon your life. Call our office to speak with Chris Olsen and learn what can be done to award you compensation for your accident.