A Sexual Orientation Discrimination Lawyer Dedicated to Fighting for Your Rights 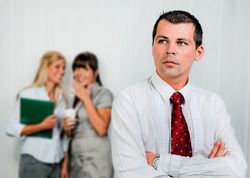 Like other forms of prejudice in the workplace, sexual orientation discrimination can often be difficult to identify. Examples include:

Co-workers and supervisors may try to conceal their discriminatory practices by providing excuses that disguise their true motives. For example, if you are denied promotion based on your sexual orientation, your employer may say it was based on performance, even though you have received consistently positive reviews. Other times, derogatory comments may be subtly and indirectly made, such as a manager mentioning or implying that a male employee is too effeminate for a particular task or position.

If you believe you have received unfair treatment because of your actual or perceived sexual orientation, it is important to consult an experienced sexual orientation discrimination attorney right away. At your initial meeting, attorney Chris Olsen can review your case for free and answer your questions regarding the strength of your legal claim.

Chris Olsen is committed to representing clients aggressively in order to obtain the maximum level of compensation possible. Over his ten years of legal practice, he has been dedicated to representing individuals hurt at the hands of negligent parties. His particular focus has been on class action and employment law claims, including those relating to wage disputes to discriminatory practices. Passionate about serving workers’ legal interests, he has developed a reputation for taking on businesses that treat their workers unfairly and illegally.

Learn More During Your Free Consultation

If you need legal representation for a possible sexual orientation discrimination claim, please contact our practice to schedule your free consultation. Acting as quickly as possible can help ensure that your rights and best interests are well protected.