Two of the most prescribed drugs in American pharmaceutical history, Darvon and its sister pain-killer Darvocet, were finally recalled in 2010, over 30 years after propoxyphene medications were first placed on pharmacy shelves. Following the recall, many Darvon and Darvocet lawsuits have been filed by those who suffered side effects, most commonly heart abnormalities. The national consumer rights organization Public Citizen has stated that more than 2,000 Americans died of heart problems associated with use of Darvon and Darvocet. 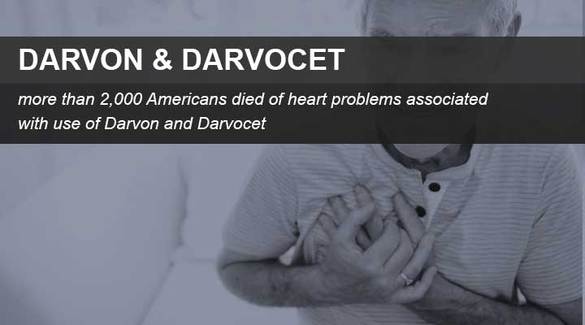 The painkillers Darvon and Darvocet have been connected to many cases of heart complications among patients.

DARVON, DARVOCET, AND THE FDA

The U.S. Food and Drug Administration, which approved the drugs, had long minimized the importance of reports and research documenting the dangers of the drug. FDA official John Jenkins explains the agency’s reversal as follows:

The drug puts patients at risk of abnormal or even fatal heart rhythm abnormalities, combined with prior safety data, this altered our risk assessment.

These after-the-fact statements are of little solace to those who suffered serious health problems or lost loved ones to deadly side effects caused by Darvon and Darvocet. The numbers of Americans who may have been harmed by these drugs is staggering: Millions of prescriptions were written each year.

Our legal team provides free consultations those who suffered side effects or lost a loved one because of the use of these medications. Please contact us if any of these conditions occurred:

Darvon & Darvocet drugs were banned in other countries prior to the US recall; for years, American consumer advocates and medical researchers raised serious questions about their safety, yet the manufacturers continued to sell these drugs. Darvon and Darvocet were incredibly profitable, which raises the question: Did the manufacturers put corporate profits ahead of consumer safety?

Contact us for a free, no obligation consultation about potential eligibility to file a Darvon or Darvocet lawsuit.