Nexium® is a medication with both over-the-counter (OTC) and prescription strength formulations that is used to control the symptoms of heartburn. Nexium® belongs to a class of drugs known as proton pump inhibitors (PPI), which are thought to work by decreasing the amount of acid that is produced and released into the stomach to digest food. Healthcare practitioners may prescribe or recommend Nexium® to treat gastroesophageal reflux disease (GERD), peptic ulcer disease (PUD), and other gastrointestinal disorders with similar symptoms. Nexium® is a second generation PPI and is thought to be an improvement over Prilosec®, the first PPI medication to be approved for the U.S. market in 1988. However, many patients taking Nexium® have suffered adverse side effects from the drug, including bone fractures, nephritis, chronic kidney disease, myocardial infarction, and kidney failure. This increased incidence of severe complications has prompted an influx of claims in the Nexium® lawsuit. If you or a loved one has suffered an injury while taking the prescription or OTC formulation of the drug, please contact an experienced defective drug attorney to arrange a complimentary case evaluation. 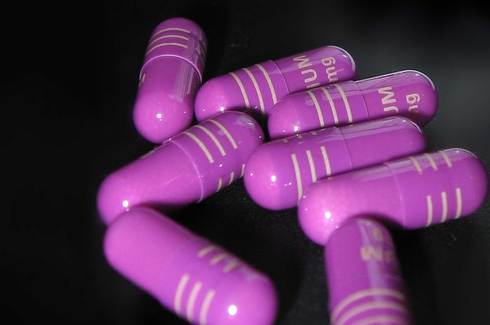 Nexium® and other over-the-counter medications have been linked to an alarming number of side effects.

Nexium® and other PPI medications work by preventing the cells that line the stomach from producing excessive amounts of acid. These drugs are called proton pump inhibitors because they block the chemical system within the stomach cells that convert enzymes into digestive acids.

Studies involving complications from PPI use have found that patients may be at an increased risk for bone fractures or osteoporosis while taking Nexium®.

Nexium® and other PPI drugs are commonly prescribed or recommended to treat ulcers and conditions that cause acid reflux. An ulcer occurs when there is a breakdown of the membrane that lines the stomach or the intestinal tract, and digestive acid damages the organ. Acid reflux occurs when the muscular band that separates and closes off the stomach from the esophagus does not function properly, allowing acid to breach the throat and irritate the sensitive tissue.

SIDE EFFECTS AND COMPLICATIONS ASSOCIATED WITH NEXIUM®

PPI medications have been available on the U.S. market since 1988 when Prilosec® was approved for sale. Nexium® was approved in February 2001, and reports of adverse events soon followed. Patients who are taking the medication can expect to experience common side effects, including headache, nausea, diarrhea, and abdominal pain.

More severe complications have also been reported in patients who are taking OTC or prescription strength Nexium® to control heartburn symptoms. Studies involving complications from PPI use have found that patients may be at an increased risk for bone fractures or osteoporosis while taking Nexium®, prompting the U.S. Food and Drug Administration (FDA) to revise the labels of these products in May 2010 by updating the safety warning.

In March 2011, the FDA issued another safety announcement about Nexium® and other PPI medications, this time concerning low magnesium levels in patients taking the drug for an extended period of time. Low serum magnesium levels can lead to more serious events or conditions, including muscle spasms, heart arrhythmias, and seizures.

The FDA again decided to revise the packaging of Nexium® to include warnings for the increased risk of vitamin B12 deficiency and acute nephritis. In December 2014, the new labeling requirements went into effect, and also highlighted some common drug interactions.

In addition to the risk of these serious complications, several scientific studies have found that patients taking PPI medications also have a higher incidence of suffering myocardial infarctions.

Many patients have already come forward to file a claim against AstraZeneca, the manufacturer of Nexium®, after suffering complications. These product liability lawsuits are still in their earliest stages, and cases of this type typically require years of research before moving forward. However, this does not mean that you can postpone seeking legal help. Each state has its own specific time constraints called statutes of limitations. Plaintiffs are required to file claims for their injuries within these time periods before the manufacturer will be released from liability.

Defective drug lawsuits that affect a large number of patients can typically be handled as multidistrict litigation (MDL). This type of classification is similar to a class action lawsuit in that individual cases are consolidated before one judge to expedite the discovery process and reduce redundancies and conflicting findings concerning evidence. MDLs are different from class actions in that the claims retain their independent status, and the ruling for one plaintiff is not legally binding on anyone else. This means that you may retain your own legal counsel and make your own decisions about accepting settlements or pursuing a jury trial.

In an article published in the British Medical Journal in January 2012, researchers from Massachusetts General Hospital, Boston University Medical Center, Brigham and Women’s Hospital, and Harvard Medical School examined the association between chronic use of PPI medications and the risk of hip fractures. This study used surveys collected from over 120,000 women over the course of more than 35 years. The Nurses’ Health Study began in 1976 and has consistently exceeded 90 percent follow-up rates, making it one of the most statistically valid and accurate large-group sources of data. After eliminating confounding factors, the researchers have come to conclusions that PPI use for at least two years raises the risk of hip fracture by 35 percent, while among smokers, this risk is increased by 50 percent.

A June 2015 article in a journal published by the Public Library of Science (PLOS ONE) looked at the findings of a data-mining study exploring the connection between PPI use and myocardial infarction. This study examined over 16 million clinical documents on 2.9 million individual patients to determine whether this medication is associated with an increased risk of cardiovascular events among the general population. Their methods eliminated other possible risk factors and compared the findings to other medications that are prescribed or recommended to treat the same conditions. The conclusions of the study support their preclinical findings that PPI medications can adversely affect vascular function and have a strong association with myocardial infarction.

Their results showed an increased incidence of kidney complications in patients taking these types of drugs.

Researchers in Toronto, Ontario published findings from a study investigating the risk of acute kidney injury in older patients who take PPI medications. The April 2015 article in the Canadian Medical Association Journal looks at a population-based study involving patients over the age of 65 who have taken PPI medications. Their results showed an increased incidence of acute kidney injury and acute interstitial nephritis (kidney inflammation) among patients taking PPI drugs when compared to a control population.

The Journal of the American Medical Association published a study in the February 2016 issue that examined the risk of chronic kidney disease in patients that used PPI medications. Their results showed an increased incidence of kidney complications in patients taking these types of drugs, and also found that patients taking twice-daily doses were at a higher risk than those who were on once-daily dosing.

If you or a loved one has experienced complications after taking Nexium®, it is imperative that you speak with a qualified defective products attorney as soon as possible. The specific statute of limitations for your state may be set to expire soon, and you may lose the opportunity to seek the compensation to which you are entitled for your injuries. Please contact an experienced attorneytoday to preserve your legal rights.