Paxil® (paroxetine) is a type of antidepressant, known as a selective serotonin reuptake inhibitor (SSRI), that works to relieve depression by blocking the reabsorption of serotonin within the brain. Paxil® is prescribed to treat depression, generalized anxiety disorder, social anxiety disorder, panic disorder, and obsessive-compulsive disorder. However, an increased incidence of side effects and complications have led may p[atients to file claims in the Paxil® lawsuit. 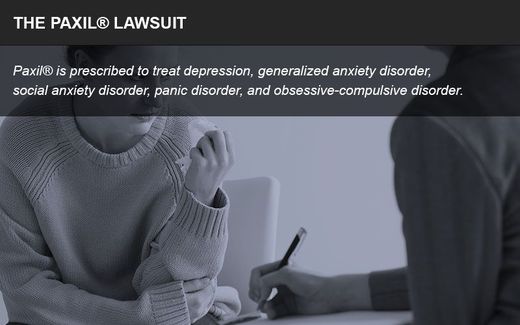 As with any drug, there are side effects associated with Paxil®. Side effects of Paxil® include:

In addition to these side effects, Paxil® use has been associated with severe withdrawal symptoms when patients stop taking the drug.

Since Paxil® was introduced to consumers, various side effects have been associated with use of the medication.

PAXIL® USE DURING PREGNANCY

Individuals who have used Paxil® for an extended period of time have experienced withdrawals when they stopped using the medication. The withdrawal symptoms can include depression, suicidal thoughts, anxiety, and nausea.

When people who have become addicted to Paxil® stop taking the drug, serious symptoms of withdrawal can develop. In some cases, patients and doctors have attributed the development of patient symptoms to other causes. Sometimes, patients are told that rather than suffering from withdrawal, they are experiencing a regression back to the original problems the drug had been alleviating. For a number of patients, however, this fails to explain new symptoms. The following is a list of Paxil® withdrawal symptoms:

Paxil® withdrawal symptoms can be severe and persistent. Due to the intense side effects that may be associated with suddenly abstaining from the drug, some people are unable to stop taking Paxil® without professional intervention. The physical manifestations of withdrawal have led, in some cases, to using shock therapy as treatment or to misdiagnosing patients with brain tumors.

The psychological symptoms of withdrawal may be different from or worse than the original problems for which the drug was taken. In any case, some patients claim that their withdrawal symptoms were so disabling that they will continue to take Paxil® indefinitely in order to avoid the reactions that quitting may entail.

In a study requested by the FDA and conducted by GlaxoSmithKline, evidence of a heightened risk of birth defects was found. The study included 3,581 pregnant women who were using antidepressants and it found that 4 percent of babies exposed to Paxil® during the first trimester of pregnancy were born with birth defects. This is slightly higher than the rate of birth defects found in the general population (3 percent).

According to the findings of another study, the rate of heart defects in babies exposed to Paxil® during the first three months of pregnancy is about 2 percent. The rate of heart malformations in the general population is about 1 percent. Most of the cardiac defects linked to Paxil® use involve holes in the atrial and ventricular chambers of the heart. While some of the heart defects have repaired themselves on their own, some required surgical operation and medical care.

In response to these studies, the FDA requested that GlaxoSmithKline strengthen Paxil®'s warning labels, advising consumers about the potential dangers Paxil® use can pose during pregnancy.

In addition, a jury in Wyoming found that Paxil® was to blame for a murder/suicide incident involving a Wyoming man and his family.

If you or a loved one has been harmed by Paxil®, you should contact a Paxil® attorney to find out whether you are eligible for compensation for your injuries.