The prescription drug Reglan and its generic counterpart metoclopramide is a medication approved for the short-term treatment of gastrointestinal problems such as gastroesophageal reflux disease (GERD), gastroesophageal reflux (GER), and diabetic gastroparesis in adults and children. However, since its introduction to the U.S. market, there have been numerous reports of adverse health affects associated with Reglan use. 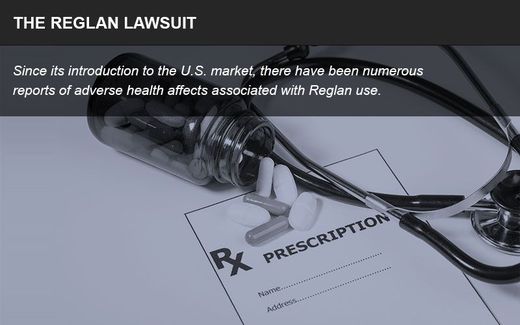 When the prescription drug Reglan is prescribed for heartburn, the doctor will most likely use one of two dosing schedules. He or she will either have their patient take the drug after they eat a meal, or the patient will take it at regular intervals during the day. The primary reason Reglan is used to treat heartburn is to prevent further damage of the esophagus and stomach from acid and to give the stomach and esophagus time to heal.

There are a variety of other uses for Reglan. It is prescribed to patients with a condition called gastroparesis. This means that the stomach does not empty at a regular interval after eating. When left untreated gastroparesis can cause nausea, vomiting, and a constant feeling of fullness. Reglan speeds up the stomach and causes natural movements of the upper intestines.

OTHER USES FOR REGLAN

Although heartburn and gastroparesis treatment are the two most common uses for Reglan, many doctors prescribe it for other purposes. For instance, in some cases a doctor may prescribe the prescription drug Reglan to help prevent nausea and vomiting during chemotherapy or radiation treatments.

DANGEROUS SIDE EFFECTS ASSOCIATED WITH REGLAN USE

The Food and Drug Administration's Adverse Event Reporting System has indentified several cases of muscle disorders among patients who were taking Reglan; the majority of those affected were children taking Reglan, as well as patients using Reglan as a long-term treatment. Some of the muscle disorders linked to Reglan use include:

All of these conditions are neurological disorders characterized by abnormal muscle movement or rigidity of the body. In response to the potential risks associated with Reglan use, the FDA required the manufacturer of Reglan to take action.

Baxter Healthcare manufactures Reglan and its generic counterpart. In February of 2009, the FDA required Baxter to update the safety labels on both medications, warning patients about the potential link between Reglan use and the development of muscle disorders such as tardive dyskinesia.

BLACK BOX WARNING FOR REGLAN USE

The risks associated with Reglan use are very serious, and in some cases can be permanent and life threatening. This has led the Food and Drug Administration to order the manufacturer of the prescription drug Reglan to add a black box warning to the products safety label. The black box warning is the strongest label possible for a prescription drug. The label update warns patients and caregivers about the possible increased risk of developing life-threatening and often incurable muscle disorders after taking Reglan.

INFORMATION ON REGLAN TRIALS AND SETTLEMENTS

Five Reglan lawsuits have been filed in the states of California, New Jersey, Pennsylvania, Alaska, as well as in Canada. A jury ruled in favor of the plaintiffs in four of the cases, and the fifth case settled out of court. The details of some of these awards are not available to the public due to confidentiality agreements. However, it is known that the California case yielded a $6.7 million jury verdict for a San Francisco woman who developed tardive dyskinesia after using the generic version of Reglan to treat heartburn. The lawsuit was filed against Wyeth, Inc., the manufacturer of the drug, for failure to adequately warn patients about the potential risks of the drug.

The amount of a settlement or verdict typically depends on the severity of the medical condition and the degree to which it has altered your life and caused financial loss. A Reglan lawyer can help you determine if it is better to settle or go to trial when you have Reglan lawsuit.

WHY IT IS IMPORTANT TO HIRE A REGLAN LAWYER

The Food and Drug Administration has required the manufacturers of the prescription drug Reglan and generic Reglan to put a black box warning label on their product, advising patients and caregivers about the possible increased risk of muscle disorders such as tardive dyskinesia, neuroleptic malignant syndrome (NMS), and dystonia.

If you or a loved one has suffered serious health affects after Reglan use, it is important to speak to a lawyer as soon as possible. You may be eligible for compensation for your injuries. A qualified Reglan attorney can review your claim and determine if you have a viable lawsuit.