THE ROUNDUP® LAWSUIT: GLYPHOSATE AND CANCER

For nearly five decades, the chemical giant Monsanto has been manufacturing and distributing their Roundup® family of herbicide products to eliminate and control invasive plants. The company has claimed that glyphosate, the main chemical ingredient in these products, poses no imminent health risks to humans and is safe to be used near crops and landscaping. However, many studies have found the chemical to be a known carcinogen, or cancer-causing agent, and recently revealed court documents allege that Monsanto and a senior Environmental Protection Agency (EPA) official may have been involved in concealing evidence from the agency and the public.

Our firm is in a unique position to assist families in need because we are composed of local attorneys who have the backing and reach of a nationwide law firm.

Many individuals who have been diagnosed with non-Hodgkins lymphoma and other types of cancer have filed claims against Monsanto in the Roundup lawsuit. These individual claims allege that the company knowingly marketed an unsafe product and actively concealed evidence to the contrary. If you or a loved one has been affected by one of Monsanto's products, please contact our offices to schedule a complimentary case evaluation with an attorney in your area. 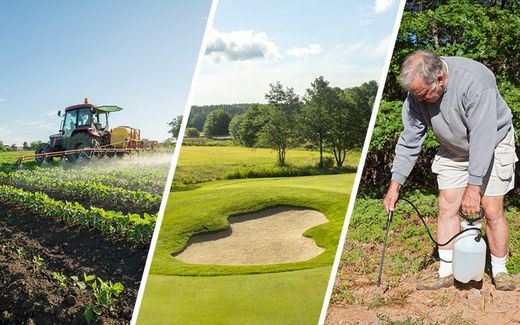 Monsanto has always maintained that glyphosate is safe for humans because we use different enzymes to create proteins. They have also marketed their Roundup® products as "environmentally safe" and "biodegradable" to promote sales. However, a French court ruled in 2007 that these claims were evidence of false advertising and ordered Monsanto to pay a fine.

Monsanto is the largest producer of genetically modified organism (GMO) seeds that have been designed to be resistant to glyphosate. These "Roundup Ready" crops account for the majority of corn and soybeans grown in the U.S., thanks in large part to their ability to thrive after being sprayed with glyphosate.

Monsanto claimed that the prevalence of these "Roundup Ready" crops would actually reduce the total amount of pesticide being used. However, studies have shown that between 1996 and 2011, when "Roundup Ready" crops were being heavily marketed and sold, the use of herbicide increased by 527 million pounds throughout the U.S.

In March 2017, a federal judge in California ordered court documents to be unsealed that showed collusion between Monsanto and a senior EPA official. These documents included internal memos and emails that outlined efforts by the company to discredit medical studies that found glyphosate to be unsafe. The email correspondence also shows that an EPA official tipped off the company about a damaging report months before it was published, giving Monsanto time to launch a counter-attack against the findings.

CLAIMS IN THE ROUNDUP LAWSUIT

Many victims, including farm workers, landscape professionals, golf course greenskeepers, and private homeowners have already come forward to file claims against Monsanto after being exposed to glyphosate. These claims allege that the company failed to adequately research the effects of the product and its connection to cancer. Additionally, previously filed claims also include:

SIDE EFFECTS OF GLYPHOSATE EXPOSURE

The most prevalent side effect associated with Roundup products is non-Hodgkin's lymphoma, but several studies have found a connection between glyphosate exposure and other conditions, including:

It is important to note that although a correlation has been found between these conditions and elevated levels of glyphosate in the bloodstream, further study is needed to determine if there is also a causal relationship.

Non-Hodgkin's lymphoma is a type of cancer that starts in white blood cells that are called lymphocytes. The lymphatic system is part of the immune system, which helps to fight infections and restore homeostasis after an illness. The lymphatic system also helps to move fluids throughout the body and remove waste products from cells.

Cancer that starts in the lymphatic system tends to grow and spread quickly because lymph tissue is found nearly everywhere within the body. Some types of non-Hodgkin's lymphoma, such as diffuse large B-cell lymphoma, are more aggressive than others. Depending on the exact type and staging of the disease, treatments may include:

Additionally, some patients may be recommended for surgery or clinical trials if other treatment methods prove ineffective.

There have been numerous medical studies that have examined the relationship between glyphosate exposure and the incidence of certain illnesses.

In an article published in the November 2001 issue of Cancer Epidemiology, Biomarkers & Prevention, researchers found a dose-response relationship between glyphosate and non-Hodgkin's lymphoma among farmworkers in a population study.

A September 2003 article published in Occupational and Environmental Medicine that looked at multiple pesticides as risk factors for non-Hodgkin's lymphoma found an increased incidence among farmworkers who had been exposed to glyphosate.

A Swedish population study that was published in the International Journal of Cancer in October 2008 found that exposure to glyphosate could double the risk of non-Hodgkin's lymphoma in less than ten years.

If you or a loved one has been diagnosed with non-Hodgkin's lymphoma after being exposed to one of Monsanto's Roundup products, please contact our offices to arrange a free case evaluation with an attorney in your area. This no obligation meeting can be an important first step towards your recovery.

Currently, claims involving Roundup are being consolidated under multidistrict litigation. These claims are similar to class action lawsuits, but each case remains independent and plaintiffs retain their own legal counsel. Olsen Law Offices has helped many families begin to put their lives back together after falling victim to corporate negligence.