COMPLICATIONS LEADING TO THE YASMIN AND YAZ LAWSUIT

Several lawsuits have been filed against the manufacturer of the popular contraceptive pills Yasmin and Yaz. Yasmin has been on the market since 2001 and is an older version of Yaz, which was introduced to the market in 2006. Both are indicated in preventing pregnancy and treating some of the emotional and physical symptoms of premenstrual dysphoric disorder (PMDD). 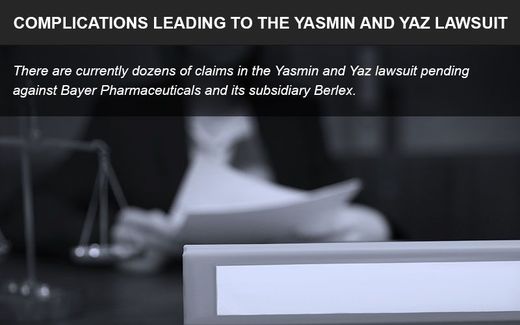 There are currently dozens of claims in the Yasmin and Yaz lawsuit pending against Bayer Pharmaceuticals and its subsidiary Berlex, alleging the drug makers were negligent in developing a dangerous drug and failed to warn consumers about the potential risks of use.

Yasmin prevents pregnancy by stopping the maturation and release of eggs from the ovaries (ovulation). Yasmin also alters the cervical mucus making it more difficult for sperm to enter the uterus. Finally, Yasmin alters the lining of the uterus, making it less receptive to an embryo.

HOW YASMIN IS DIFFERENT

Yasmin is unique from traditional birth control pills because the progesterone used, called drospirenone, closely relates to spironolacton, which is a medication used as a diuretic. Drospirenone works against testosterone and other "male" hormones. All women have some male hormones naturally, which cause acne and other problems. Drospirenone may increase the level of potassium in the blood, which can be a problem for some women.

Occasionally, a healthcare provider may recommend Yasmin for something other than a contraceptive. This is called "off-label" use. Common off-label uses are to treat heavy menstrual bleeding, painful menstrual periods, irregular menstrual periods, acne, and premenstrual dysphoric disorder (PMDD).

Most of Yasmin problems are linked to the use of drospirenone, which works against the body's normal regulation of balance between salt and water. This can cause elevated potassium levels, which is known to cause serious heart problems. The product labeling and package insert for Yasmin recommends that blood tests be performed to check users' potassium levels within the first month of use. Such blood tests are not necessary for any other types of birth control pills.

YASMIN IS ON PUBLIC CITIZEN'S "DO NOT USE" LIST

The Public Citizen Consumer advocacy group listed Yasmin as a "Do Not Use" drug in April 2002 due to side effects caused by drospirenone. Side effects noted include increases in blood levels of potassium, which can result in heart problems and other dangerous health concerns. In addition, there is not evidence that the drug is better than other contraceptives or that the benefits of Yasmin use outweighs the risks.

Bayer, the manufacturer of Yasmin has received several warning letters from the U.S. Food and Drug Administration (FDA), regarding the accuracy of their advertising campaigns for Yasmin.

Advocacy groups claim that Bayer has known about the risk of potential Yasmin problems for some time and that multiple studies have established the potential risk of life-threatening injures. Despite the known risks, the drug makers have continued to market Yasmin without adequate warnings and introduced "Yaz", another oral contraceptive containing drospirenone, which also carries the same risks.

An MDL is the combination of a large group of individual claims in order to coordinate discovery and scheduling. MDL litigation involves at least one Yasmin class action lawsuit among the individual cases, filed on behalf of a nationwide group of individuals that purchased Yasmin and who claim that compensation is owed as a result of false, misleading, and fraudulent advertisements.

The United States Judicial Panel on MDL can consolidate and centralize pretrial proceedings for related actions. This process eliminates duplication, avoids inconsistent pretrial rulings, and serves the convenience of the witnesses, parties, attorneys and the judiciary involved in each case.

Although Yasmin lawsuits across the United States are centralized in an MDL for pretrial litigation, the cases remain individual claims. Each plaintiff retains their own Yasmin attorney and maintains the right to present their case to a jury in the district where the case was originally filed.

A REVIEW OF YOUR CASE

A litigation attorney will typically set up a consultation where you and the attorney discuss your case. The attorney will ask questions about your use of Yasmin and the side effects suffered. Be prepared to tell the attorney the dates you took Yasmin, the reasons why the drug was prescribed, any medications you were taking while on Yasmin, any medical conditions that you developed while on Yasmin, and a full account of the side effects suffered.

If a lawsuit is filed, the attorney files a formal complaint in court alleging that you were injured by Yasmin. After the claim is filed and the defendant(s) file their answers, then a formal discovery phase of the lawsuit begins. During this time, the attorney will be in close communications with you on how your case is proceeding. You can choose to settle the case at any time, or you can proceed to trial where your attorney will fight to protect your rights.

You may be entitled to damages for past and future medical expenses, rehabilitative cases, funeral expenses (if applicable), lost income, and pain and suffering. You may also be entitled to additional damages, such as punitive damages, in some situations. Circumstances surrounding each case are unique, so it is impossible to estimate a specific amount of damages that can be recovered. However, an attorney can provide a more detailed description of damages based on the facts of your case.

Women who have suffered adverse health effects after Yasmin or Yaz use should seek the help of defective drugs attorneys. An experienced lawyer can help you obtain compensation for medical costs, loss of wages, and pain and suffering. Contact an attorney today.