Fentanyl is a pain medication that is about 100 times as strong as morphine and is used to treat chronic pain. Because of the strength of the medication, pain patches are used to deliver safe amounts of Fentanyl to patients. 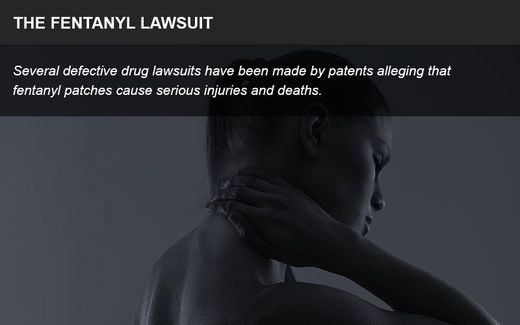 The Duragesic pain patch was released to the U.S. market in 1994 by Johnson & Johnson subsidiaries, Janssen Pharmaceutica, Inc. and Alza Corp. Since it was introduced to patients, makers of the Duragesic patch, as well as makers of generic versions, have faced several defective drug lawsuits by patents alleging that the patches cause serious injuries and deaths.

Lawsuits filed against the makers of Fentanyl pain patches allege that manufacturing defects allowed the patches to leak the potent Fentanyl gel in an uncontrolled manner. When used and working properly, the pain patches are designed to steadily release the Fentanyl gel over the course of three days. If the powerful drug is delivered in heavy doses, it can result in serious injury, respiratory depression, or death.

There have been many reported cases of patients suffering severe brain injuries that are connected to Fentanyl. Opioid painkillers, such as Fentanyl, can increase intracranial pressure and cause injuries if taken in excessive dosages.

One major risk of Fentanyl that has emerged in recent years is respiratory depression. Medically this is referred to as hypoventilation. In fact, some experts believe that this risk of Fentanyl may have caused a number of deaths. This has led to an investigation by the Food and Drug Administration.

Another risk of Fentanyl emerged in recent years when several suspected overdoses of the drug occurred. It is believed that a defect in skin patches caused the Fentanyl to release too soon, administering dangerous and in some cases fatal doses of the drug. In response, Johnson & Johnson has issued updates on the proper use of the product and its potential dangers.

Another risk of Fentanyl revolves around potential addiction and abuse of the drug. Similar to Oxycontin®, Fentanyl is considered to be a controlled substance and narcotic because of its ability to become habit forming. Although Fentanyl yields a high similar to that of heroin, it is considered more addictive than heroin because the effects of the high are more short lived.

DO YOU HAVE A CASE?

In the past few years, the safety of Fentanyl pain patches has come under scrutiny by the FDA and consumer groups. The manufacturers of Fentanyl patches have recalled lots of the skin patches due to possible defects that allow unsafe dosages of Fentanyl to leak. This could allow patients and caregivers to be exposed to dangerous amounts of the Fentanyl gel. Improper exposure to Fentanyl can cause respiratory depression and overdose, among other side effects. Recent Fentanyl pain patch recalls include:

Actavis Inc. announced a voluntary recall of 14 lots of its Fentanyl transdermal system CII patches sold in the United States. Corium International Inc. manufactured the affected lots on contract for Actavis. The patches have expiration dates between May and August of 2009 and come in the 25, 50, 75, 100 microgram per hour patch form.

In June of 2007 a jury awarded $5.5 million dollars to the family of Adam Hendelson. Adam was 28 years old when he died of an overdose after a defective Fentanyl pain patch that was placed on his arm. This was the first lawsuit that linked fatal overdoses to defective Fentanyl patches. The Fentanyl lawsuit was filed against Johnson and Johnson subsidy, Alza Corp., and Janssen Pharmaceutica Products.

In November 2008 Johnson and Johnson subsidy, Alza Corp., and Janssen Pharmaceutica Products lost another Fentanyl lawsuit when a jury awarded the family of Janice DiCosolo $16.5 million dollars. Janice was a 38 year old mother of three who dies after using a Fentanyl patch in 2004.

In many cases it is hard for a person to determine whether or not they have a valid Fentanyl case. This is where a Fentanyl attorney has the experience necessary to assess your situation and determine who is responsible for your pain and suffering. If any of the above situations apply to you or your loved one, is important to contact a Fentanyl attorney for a review of your case.