PROFESSIONAL GUIDANCE THROUGHOUT THE ACTOS® LAWSUIT

Actos® is a prescription medication designed to help patients with type 2 diabetes control their blood glucose levels. Unfortunately for many patients, multiple medical studies have linked Actos® to the onset of bladder cancer, congestive heart failure, organ damage, and many other troubling complications. Pharmaceutical companies have an obligation to develop safe medications and appropriately warn both healthcare providers and patients of any possible side effects or increased risks associated with using their products, and a failure to do so can result in legal action. This has led many patients to file claims against the manufacturer of the drug, Takeda Pharmaceuticals, in the Actos® lawsuit. If you or a loved one has been prescribed Actos® and experienced any adverse complications while taking the medication, you may be entitled to compensation for punitive damages, medical expenses, lost income, pain, and suffering. Please contact an experienced defective drugs attorney today for a complimentary case evaluation. 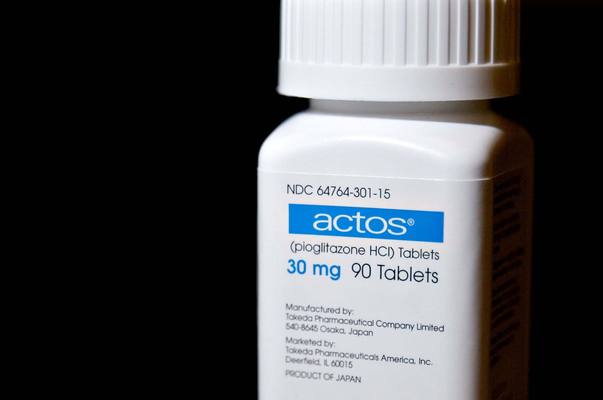 Actos® patients have experienced a number of serious side effects after taking the drug.

WHY IS ACTOS® PRESCRIBED?

Patients with diabetes cannot produce a sufficient amount of insulin to control their blood sugar, and the cells of their bodies are not as sensitive to its effects. Pioglitazone, the active ingredient in Actos®, belongs to a class of anti-diabetic medications called thiazolidines that are used to help control symptoms of type 2 diabetes. These types of medications are often referred to as “insulin sensitizers” because they attach to receptors in cells and increase their affinity to the hormone that regulates blood sugar. This allows the cells to effectively remove more glucose from the bloodstream and maintain a healthy blood sugar level.

Actos® also works by inhibiting the liver from producing or secreting glucose into the bloodstream. The liver plays an important role in maintaining blood sugar levels. It stores glucose in the form of glycogen and releases it back into the bloodstream when signaled by insulin. The liver can also produce glucose from amino acids and lipids within the blood. Actos® helps to regulate the activity of the liver and make it more responsive to insulin.

Many claims that have been filed against Takeda Pharmaceuticals allege that the company intentionally concealed the increased health risks associated with the medication. A large number of patients also name Eli Lilly and Company, Takeda’s U.S. partner in selling and marketing Actos®, in their claims. Plaintiffs list a number of additional counts against the two companies, including

Unfortunately for patients who suffer from diabetes, there have been several medications, such as Invokana®, Avandia, and Onglyza®, that have been associated with an increased risk of side effects. The most troubling complication that has been associated with taking Actos® is an increased risk for developing bladder cancer. According to a study published by the British Medical Journal in August 2012, patients that have been taking the medication for a period of longer than 12 months have an 83 percent higher incidence of bladder cancer. Another study from May 2011 that looked at the adverse event reports that were sent to the U.S. Food and Drug Administration (FDA) between 2004 and 2009 found that nearly one-fifth of diabetic patients who were also diagnosed with bladder cancer had taken Actos®.

In addition to a significantly higher risk of developing bladder cancer, patients who have taken Actos® have been found to have a higher incidence of congestive heart failure. The FDA considers this risk to be so great that it requires a “black box” warning on all Actos® packaging. This type of warning appears on a drug’s label and is intended to call attention to serious or life-threatening risks.

Actos® patients have also developed other serious conditions after using the product, including:

If you have been prescribed Actos® and experienced any adverse complications, you may be entitled to compensation.

Claims filed against the manufacturer and marketer of Actos® allege that the companies were aware of the increased risk of complications associated with the drug, but failed to adequately warn the public.

Takeda Pharmaceuticals and Eli Lilly began marketing Actos® in 1999. Pre-approval studies that were conducted to ensure the safety and effectiveness of the medication showed tumors in rats that had been given the drug. The packaging for the medication stated that the relationship between the tumors found in the rats and possible tumors in humans is unclear.

In 2005, two clinical research projects that were a part of Takeda’s PROactive study found a higher percentage of bladder cancer in patients who had taken Actos® than in those who had taken another medication. Additional studies published by the FDA found that patients taking increased doses and prolonged durations of Actos® use had a statistically significant increase in developing bladder cancer.

Eli Lilly and Company stopped marketing Actos® in 2006. The FDA required Takeda Pharmaceuticals to update the packaging to include the results of a two-year carcinogenicity study that found a higher incidence of bladder cancer in rats that were given higher doses of Actos®.

By 2007, the FDA required Takeda to update their packaging to include the “black box” warning about the increased risk of congestive heart failure associated with Actos® use. This type of labeling is the strictest warning that the FDA can require on medications.

The FDA began reviewing data from a 10-year study on Actos® and its complications in 2010. A 2011 study by researchers in France found an increased risk of bladder cancer in patients taking Actos®, causing the drug to be removed from the market in that country. Additionally, Germany recommended not starting Actos® therapy in new patients until the risks are better understood.

Later in 2011, the FDA released a safety statement that warned patients who have been taking Actos® for over a year that the drug “may be associated with an increased risk of bladder cancer.” Following these studies and warnings, the first claims in the Actos® lawsuit were filed.

In 2015, Takeda Pharmaceuticals settled about 9,000 claims concerning Actos® for at least $2.37 billion. This amount is one of the largest pharmaceutical settlements in history. As part of the terms of the agreement, the manufacturer does not admit to any wrongdoing on their part during the development or marketing of the drug.

Each state has its own time limitations on these types of product liability cases before the manufacturer of the medication is released from liability for your injury. If you were prescribed Actos® and experienced any adverse complications, you may be eligible for a significant settlement amount. Contact one of our experienced attorneys who can evaluate the details of your case at no cost to you.