Avandia is a drug used to treat adult type-2 diabetics by improving their blood sugar control. Avandia, along with the diabetes drugs Actos®, Invokana®, and Onglyza® has come under scrutiny by consumer groups and the FDA due to an increased risk of adverse health effects in patients taking the medication. In 2007, the FDA issued a black box warning for the drug to advise patients and medical professionals about the possible health risks linked to use of the diabetes medication. 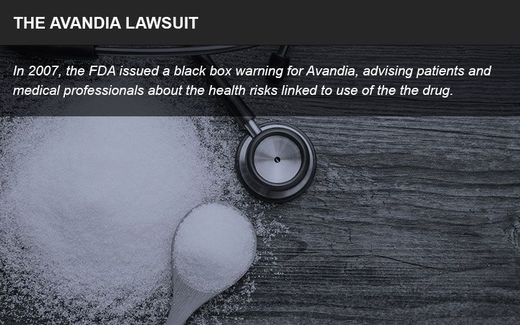 Avandia, also known as rosiglitazone, is used for the treatment of Type 2 diabetes. Type 2 diabetes is a disorder in which the body becomes resistant to the effects of insulin, combined with lowered insulin secretion. Insulin is a hormone that's produced by the body in response to increased levels of glucose in the blood. When insulin is secreted, it causes the liver and muscles to absorb some of the glucose in the blood, which makes it available for use. It also prevents extended periods with elevated blood glucose levels, which can lead to diabetes-related problems such as kidney failure, blindness, limb amputation, heart disease, and stroke.

Avandia works differently than some other diabetes medicines as it does not cause the body to make more insulin. Instead Avandia facilitates the absorption of natural insulin in the body for improved blood sugar control.

USED WHEN OTHER METHODS DON'T WORK

This medication is used when other methods such as diet, exercise, and weight reduction are not enough to lower blood glucose levels on their own. Effectively controlling high blood sugar helps prevent heart disease, strokes, kidney disease, blindness, and circulation problems, as well as sexual function problems (impotence). Avandia is used either alone or in combination with other anti-diabetic medications such as metformin, sulfonylureas, and insulin. Effects of this medication are usually seen within 8 to 12 weeks of taking the drug.

Avandia is often referred to as an "insulin sensitizer" because it attaches to the insulin receptors on cells throughout the body and causes the cells to become more sensitive, or responsive, to insulin thereby removing more glucose from the blood.

Because Avandia only provides benefits in the presence of insulin, it's only useful for Type 2 diabetes (in which insulin is still produced), not Type 1.

Experts believe that Avandia may be responsible for more than 100,000 heart attacks since it was first prescribed. This has led to a mass of lawsuits against GlaxoSmithKline PLC, the drug manufacturer. Many consumer health advocate groups question the drug's safety and believe that the FDA should recall the medication.

A recent study in British Columbia, Canada, has showed a significant risk of debilitating bone fractures for patients who used the prescription drug. This study examined the medical history of 84,339 patients. The study compared the rate of bone fracture for patients who took thiazolidinediones like Avandia and Actos, with patients who took other drugs prescribed for diabetes. Researchers in the study found that the risk of serious fracture was almost 30 percent for those taking thiazolidinediones like the prescription drug Avandia.

The drug is not recommended for people with active liver disease. It may cause unexpected tiredness, unusually rapid weight gain, dark urine, yellowing of skin, and stomach problems. These symptoms are often associated with liver disease, which is a possible danger of taking Avandia.

OTHERS RISKS AND CONCERNS

The British Columbia study showed that older patients are at greater risk of experiencing the dangerous side effects linked to Avandia use.

According to the Avandia website, use of the drug can also increase the risk of becoming pregnant, anemic, or hypoglycemic.

On Nov. 14, 2007, the U.S. Food and Drug Administration (FDA) announced that the manufacturer of Avandia (rosiglitazone) is adding new information about potential increased risk for heart attacks to the existing boxed warning. This action follows recommendations made at the July 2007 joint meeting between FDA's Endocrine and Metabolic Drugs and Drug Safety and Risk Management Advisory Committees. Avandia is used to treat Type 2 diabetes and is manufactured by GlaxoSmithKline in Philadelphia, Pa. The changes to the labeling are outlined below.

If you or a loved one has suffered adverse health effects after taking Avandia, it is important that you contact a physician for medical advice immediately. You should also consult a defective drug attorney to find out if you have a viable Avandia lawsuit. A qualified lawyer can review your case and advise you of your legal options.