The Food and Drug Administration approved Mirapex in 1997 for the treatment of restless legs syndrome and Parkinson's disease. Since then, the FDA has received dozens of reports from patients who say they developed serious compulsive behavior problems. 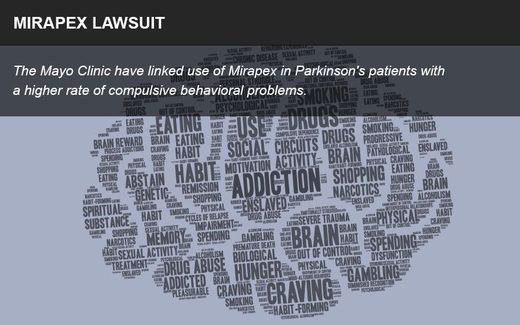 Mirapex is often used to treat Parkinson's disease, which is a neurological disorder that results in the loss of neurons in the part of the brain that controls movement. Those who suffer from Parkinson's disease have lower dopamine levels than normal, causing movement problems. As Parkinson's disease progresses, people develop uncontrollable trembling and shaking.

Unfortunately, there is no cure for RLS. However, some forms of treatment help to lessen RLS symptoms. Mirapex is typically used to treat primary RLS.

Mirapex is a dopamine agonist, which means that it works similar to dopamine, a naturally occurring brain chemical. Much like natural dopamine, Mirapex binds to dopamine receptors and stimulates them. A dopamine deficiency is likely responsible for many of the symptoms of Parkinson's. Using a medication such as Mirapex helps to relieve symptoms.

Occasionally a healthcare provider may recommend Mirapex for something other than Parkinson's disease or primary RLS. Off-label uses include treating tremors not due to Parkinson's, fibromyalgia, and secondary RLS.

The development of pathological behaviors is most likely to occur in Parkinson's patients over the age of 65 who are taking Mirapex.

A study conducted in 2003 raised concern about the possible side effects of taking Mirapex. The study, done by the Muhammad Ali Parkinson Research Center at Barrow Neurological Institute in Arizona, found that 1.5 percent of the Parkinson's patients treated with Mirapex developed compulsive gambling behavior. This side effect occurred in patients taking Mirapex, but not with those taking other Parkinson medication.

In 2005, results were confirmed by another study at the Mayo Clinic where 21 patients developed a compulsive gambling problem after taking Mirapex. This study also found that 20 percent of patients taking Mirapex suffered from uncontrolled sleepiness, including falling asleep while driving.

According to a study presented at the International Congress of Parkinson's Disease and Movement Disorders in 2008, more than 13 percent of Parkinson's patients taking dopamine agonists suffered from at least one of the four severe behavioral addictions linked to Mirapex use: gambling, sexual food, and shopping addictions.

Safety labeling for Mirapex includes warnings that the drug may cause a person to fall asleep without warning, even while engaging in normal daily activities, such as driving. Labeling warns that Mirapex may cause hallucinations, dizziness, nausea, or fainting.

Mirapex labeling also recognizes that there have been reports of impulse control disorders and compulsive behaviors in patients and encourages patients to talk to their doctor if they experience new or increased gambling urges, increased sexual urges, or other intense urges such as compulsive shopping or eating.

The first Mirapex verdict in 2008 awarded the plaintiff $8.2 million. The case involved a man who used Mirapex for almost four years, during which time he suffered a serious gambling addiction. This case was significant since lawyers with pending lawsuits could gauge the prospects of other Mirapex claims by the first case's outcome, which was a victory for the plaintiff.

In almost every claim, the victims of Mirapex side effects had no prior history of obsessive or compulsive behaviors. The makers of Mirapex have denied any association between these behaviors and the medication. Lawyers who are knowledgeable in Mirapex lawsuits, however, know otherwise since they are educated on numerous studies that link Mirapex to compulsive behaviors.

Mirapex works by mimicking the effects of dopamine in the brain. Dopamine helps people with Parkinson's disease gain control of their movements and increases feelings of happiness and satisfaction. However, dopamine is also known to produce a rush in the brain of people who are anticipating a reward or excitement. Many believe that this rush is the cause of the compulsive behavior linked to Mirapex. 2008 Study Raises Concerns about Mirapex and Compulsive Behaviors

The 2008 study presented at the International Congress of Parkinson's Disease and Movement Disorders investigated the connections between compulsive behavior and dopamine agonists like Mirapex. The study found that patients on these medications were nearly three times more likely to have at least one impulse-control disorder compared with patients receiving other treatments. The study found that more than 13 percent of patients taking dopamine agonists suffered from at least one of four serious behavioral addictions.

If you or a loved one has developed a compulsive behavioral problem following Mirapex use, consult a lawyer as soon as possible for a review of your case. You may be eligible for compensation; however, there are strict deadlines plaintiffs must meet when filing dangerous drug lawsuits. Speak to a Mirapex attorney who can help you file your suit on time.